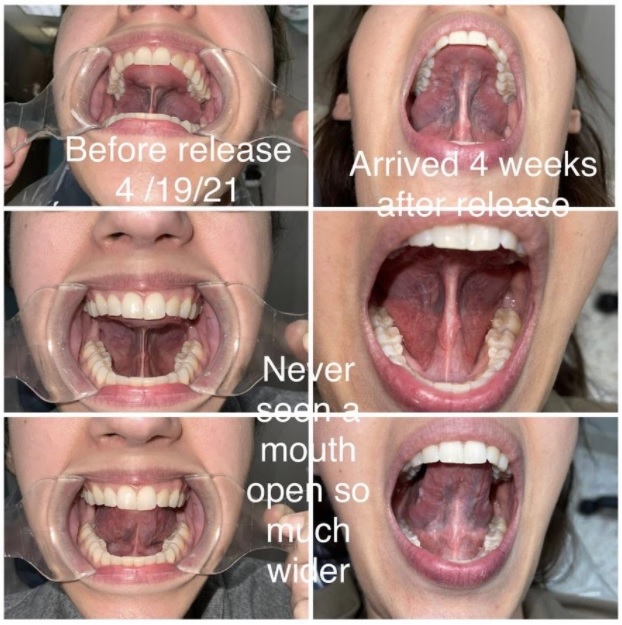 Dr. Roca recently discovered that she herself lived for many years with a tongue-tie, and recently had her tongue-tie released using the same CO2 laser that she now uses in her practice. It was a painless procedure and finished within five minutes. She had no post-op pain and she has been delighted with the results. She wishes she had it done years ago. She chose to release her tongue at the age of 51 because she was working hard on her oral myofunctional exercises and realized her tongue was tied down in the floor of her mouth, preventing her from keeping her tongue in the roof of her mouth 24/7. She realized that her posterior tongue-tie was making her severe sleep apnea worse.

“After my tongue was released, it was incredible how easy it was to keep my tongue in the roof of my mouth, and I felt an immediate looseness in my neck and shoulders. I always thought my neck and shoulders were tight because of my job, but it must have been my tongue-tie since both my neck and back tension are now gone. But most of all, the last thing I expected was that the numbness in my fingers, present most of the day and night, would disappear. I was diagnosed with the beginnings of cervical stenosis, which was causing my numb fingers, and was told that when my numbness was too much to handle on both hands, I would need to have neck surgery. No one ever thought it could be my tongue-tie. After my tongue-tie was released, my numbness slowly started to go away, and by one week, it was completely gone and has yet to return. And I don’t see it happening.” 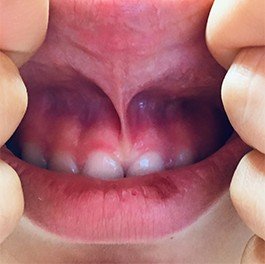 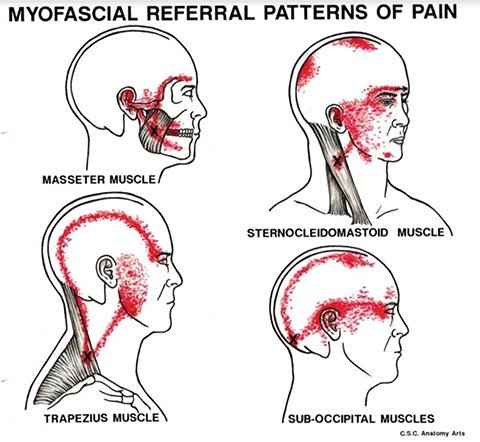 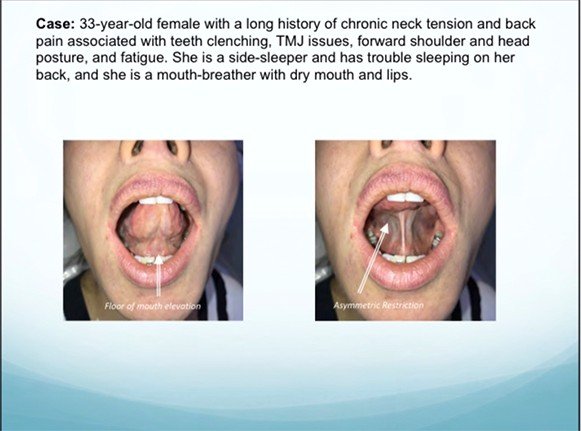 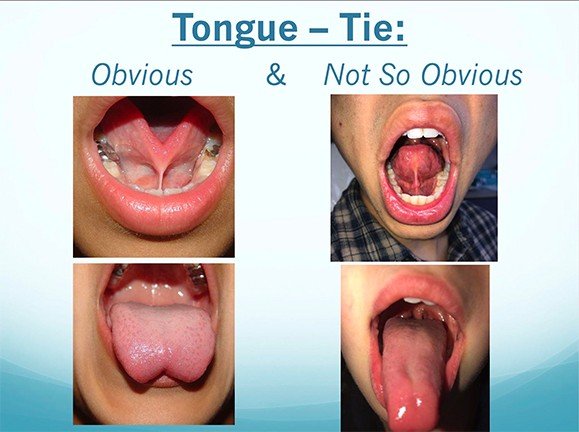 We know that tongue-ties run in families, but because it is a dominant gene, we are seeing more and more tongue-ties every day.Your tongue should fill up the entire roof of your mouth. When it does, it provides an internal support structure for the upper jaw. If your tongue is in the right place, your teeth will grow in straighter and your face will develop properly. A tongue-tie keeps your tongue in the bottom of your mouth. People who are tongue-tied often mouth breathe, so they experience a variety of myofunctional problems and symptoms. Chronic jaw pain, facial pain, headaches, clenching and grinding, along with dental and orthodontic issues and mouth breathing are common in people with tongue-ties.

Studies show that children who are tongue-tied are more likely to develop sleep apnea and airway issues. We also notice that patients that are tongue-tied swallow by pushing forward. We have noticed that this unnatural swallow pattern is what has led to many baby teeth not falling out naturally; we end up seeing permanent teeth often while the baby tooth is still present. 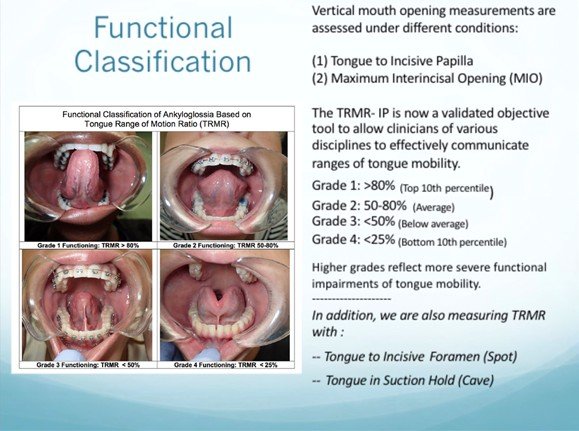 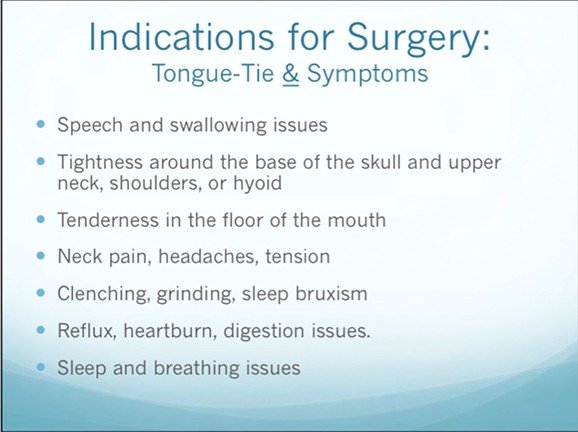 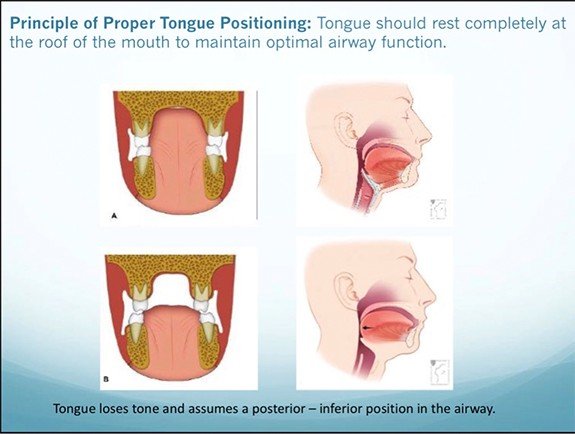 Pre-Op Exercises
It’s critical to do myofunctional therapy exercises before the procedure for a successful outcome! We will prescribe a series of exercises to help strengthen and prepare the muscles of the tongue for the new range of motion it will experience post-surgery.

Wound CareThe mouth is very good at healing after a surgery, which is why caring for the wound is an integral part of the process. If the wound is not managed properly, it’s possible the tongue will reattach the way it was before the frenectomy.

The tongue and oral muscles will need to be retrained and strengthened after the frenum is released.

We perform laser frenectomies using the LightScalpel® CO2 laser. We perform them on children of all ages — infants to adolescents — as well as adults. Because of the preciseness of the laser, we are able to gently remove the tissue causing restrictions without bleeding and with minimal post-op discomfort.

The treatment area is better defined when muscles are toned. For this reason, Dr. Roca recommends myofunctional therapy prior to releasing the frenum. Post-frenectomy myofunctional therapy is also needed following treatment to reestablish regular oral functions such as swallowing, chewing, speaking and normal breathing patterns that were affected by the tongue-tie [1]. The length of time you will be in therapy will be determined by the myofunctional therapist based on your needs. Without this therapy, the incorrect oral habits will remain and may eventually lead to a relapse of obstructive sleep apnea or other sleep-breathing disorders, as well as other disorders. All of this makes it important that we understand the continuous interaction of the tongue with other oral-facial muscles and the development of normal anatomic structures supporting the airway [2]. 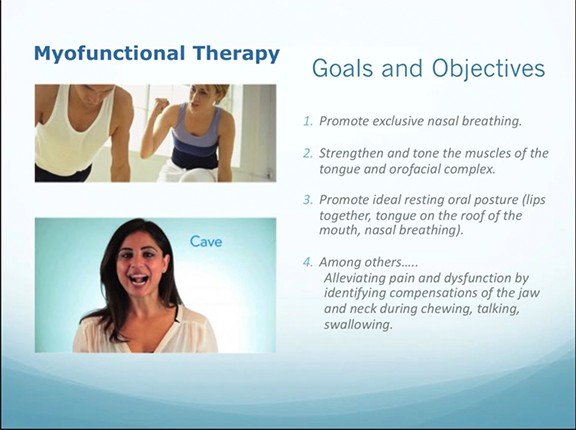 Can laser revision cause scar tissue?

Yes. Any wound can have scar tissue. The precision of the laser and the lack of collateral damage because of focused energy is thought to minimize that scar tissue. Regardless of the technique used, however, if the entire tongue-tie is released (including the posterior portion), then there is a higher chance of scar tissue because the wound is deeper and the opposing edges of the release site are closer together, increasing the chances of scarring. Often, to reduce scar tissue, Dr. Roca can add sutures that will dissolve on their own, but she has found positives and negatives from the suture approach.

Are stretches necessary to prevent reattachment?

Do I need to have a thick lip-tie cut in the operating room in case it bleeds?

No. It’s all about preparation. When Dr. Roca does the laser treatment, she just injects a small amount of numbing medicine that contains adrenalin. There’s minimal bleeding, and the release can be done easily in the office.

If the release is done absolutely perfectly and the stitches are placed precisely, then theoretically reattachment would be difficult. That being said, Dr. Roca’s experience is that placing stitches with the CO2 laser is not necessary since the bleeding, if any, is minimal and will stop on its own. Plus, she always sees the patient one week post-op to stretch open the wound in case reattachment has started.

Is tongue-tie functional release different for adults vs. children?

The surgical goals of tongue-tie release are different for infants compared to adults. A frenectomy for infants [3, 4] is performed to ensure proper eating, breastfeeding and nasal breathing. The needs of an adult are much more diverse, and the problem is complicated further by the constant incorrect oral habits of many years, leading to deformation and damage to the orofacial structures that must also be treated and corrected. Adult frenectomies are much more extensive, and they typically involve mandatory myofunctional therapy before and after the procedure. Dr. Roca’s technique for an adult frenectomy includes: 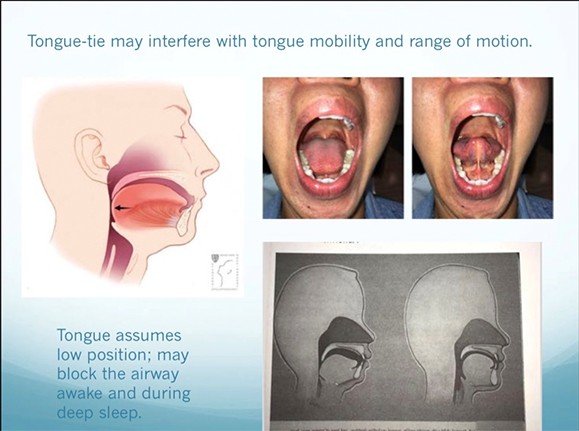 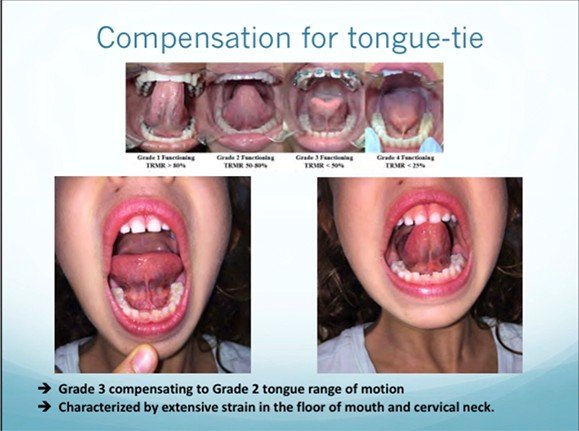 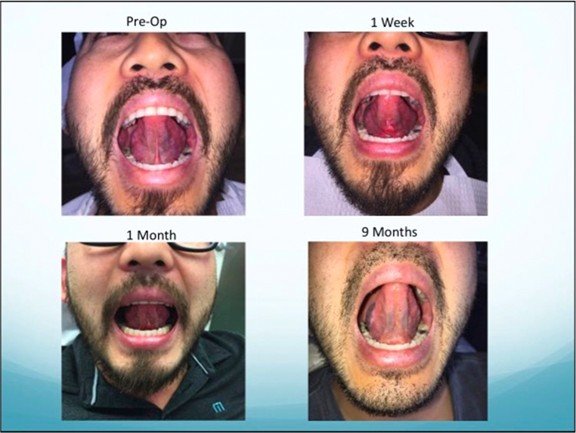 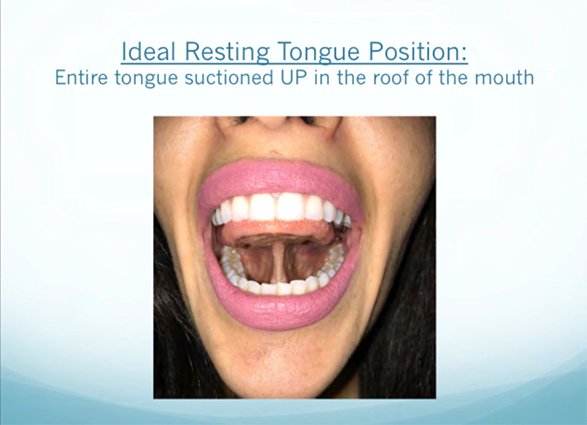 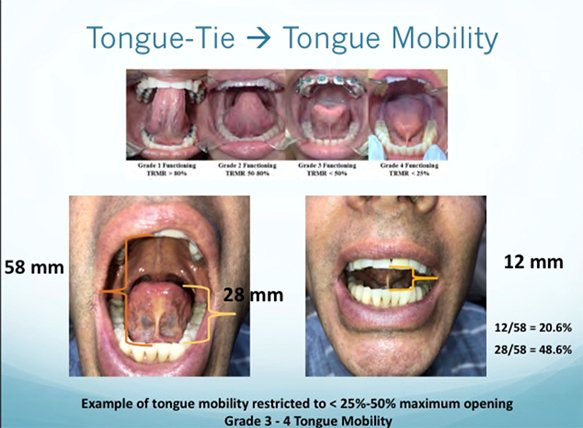 Photos courtesy of Dr. Soroush Zaghi at The Breathe Institute 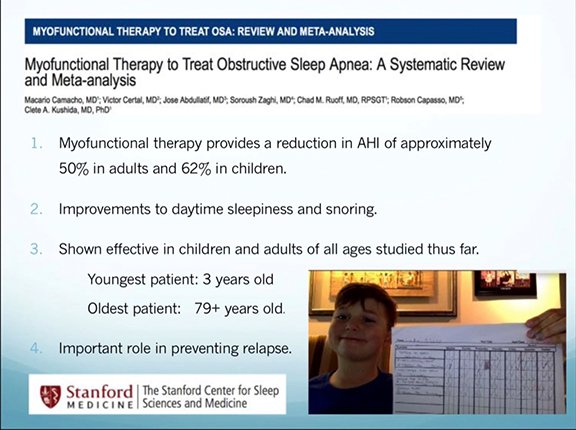 Below, a testimonial of patient a few days after posterior release.
Below, a testimonial after her anterior tie release.
Below, Dr. Roca teaching patient via video how to suction tongue flat against roof of mouth to pass test ready for release.
Below, Dr. Roca teaching patient over video how to do tongue clicks and suction flat.
Below, patient has sent a video to Dr. Roca showing she can keep her tongue flat on roof of her mouth without any vibration or movement for at least 30 seconds. This means tongue is strong and conditioned enough to be released.
Below is a video of patient bloopers trying to keep her tongue flat for 30 seconds.

No one needs to live with the difficulties of tongue-ties and lip-ties. Call 703-237-7622 now to schedule a visit to see how we can help you or your child.